I have to start with the disclaimer that my photo doesn’t do it justice. I took that photo to show the spinach for the Pact app and forgot to take a good picture before I ate it. It was that good! 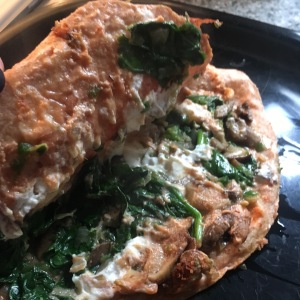 This is a Weight Watchers recipe (they have a lot of good ones, including their Spicy Black Bean Soup that I love!). In fact, I came upon it while look on their sight for the soup recipe. Goat cheese, spinach, chipotle, how could it not be good?

In addition to being light, it’s also vegetarian, something I’m trying to be. The struggle is real y’all!.

I halved the recipe since it was only me, and only used 1/2 a minced shallot, which didn’t equal a 1/2 cup  for two quesadillas and it was great. Though I love goat cheese like it’s family, I wanted to go light on the calories and only crumbled a tbsp on each quesadilla and it was still full of creamy yumminess.

Obviously I can’t post the full recipe, so you can find the directions at Weight Watchers here.

Enjoy and if you decide to make it, tell me what you think in the comments.

One thought on “Goat Cheese-Mushroom Quesadillas with Chipotle Cream”