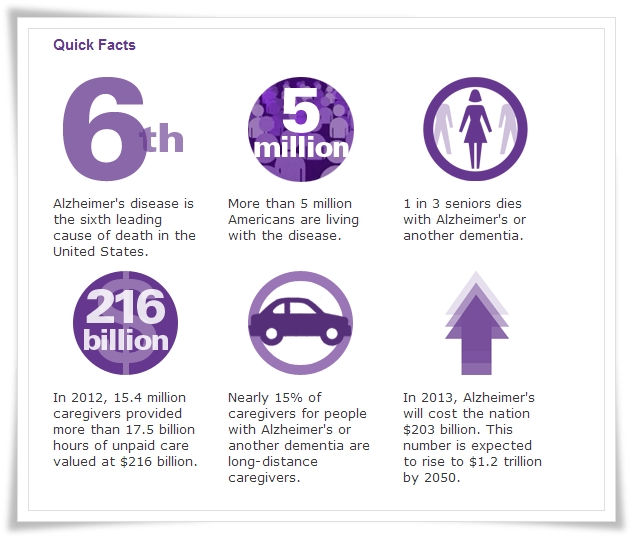 What do you know about Alzheimer’s?

These are just some of the statistics about Alzheimer’s and other types of dementia, according to the new report, 2013 Alzheimer’s Disease Facts and Figures.  As staggering as the facts may be, they don’t even begin to cover the day to day reality of caring for someone with Alzheimer’s.  Caring for someone like my Dad.

Almost four years ago I uprooted my life and moved to Puerto Rico from Chicago to spend time with my Dad.  He had been diagnosed with Alzheimer’s and I wanted to spend quality time with him before the inevitable happened; before he forgot my name.

In the time I spent there, he didn’t say much on a day to day basis.  Days would go by and all of his spoken words combined added up to a paragraph…maybe. He didn’t say much, but he sang.  BOY did he sing.  He has a love for old, romantic ballads and he would belt them out with such passion that you barely noticed that he could never quite hit that high note he aimed for. It never ceased to amaze me how he knows all of the lyrics to those old songs and secretly it thrilled me to know where I got my love of singing.

Thankfully his disease was in its early stages then and he still had a general understanding of the present but the signs of his disease were definitely beginning to show. The rare conversations we had about the present were often repeated just a few days later and more often than not his topic of choice was the past.  He could recall memories spanning from his childhood to early adulthood and recount them as if they happened yesterday.
As great as it is that he has such great memories of that span of his life and can relive those days, as well as entertain himself with the music of his youth, sadly, that is where he is stuck.  He knows who we are and for the most part knows how to function day to day, but even that is beginning to change.  In the six months I have been helping to care for him I have seen the changes that I hoped would not come.  He is not always lucid, he is rarely active and often needs to be prompted to eat and take the many medicines he’s prescribed.  He sleeps most of the day and his solo concerts are becoming a rarity.

Though he is here physically, most days the essence of him is not here and we, his family, are left to watch as he slowly leaves us.  That is the heartbreak of Alzheimer’s; the loss that, unlike other diseases, offers you no option but acceptance of the inevitable.   The best you can do is provide the best care possible, appreciate each and every moment of lucidity and prepare yourself for the long goodbye.

Inside the Brain: An Interactive Tour

One thought on “When you’re saying the long goodbye: World Alzheimer’s Month”