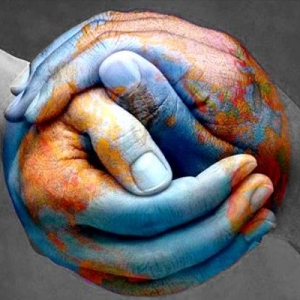 The fifth in the “Defining Moments: Search for Identity Series.” This one comes to us from writer, Hector Luis Alamo, Jr. Read more of his personal blog, On the Contrary and follow him on Twitter, @HectorLuisAlamo

As a mixed-race, mixed-nationality, second-generation Latino American, my identity has been in constant flux for much of my young life.Born in Humboldt Park, and surrounded by my dad’s side of the family, who seemed to end every other word with “-ao,” I was sure I was 100-percent boricua — albeit, a dark one with a lot of indigenous blood coursing through my capillaries. My grandfather Ines, whom everyone called “Papi Two,” was a short, bald old man whose dark skin made him look like a coffee bean wearing a golf cap and a white mustache. My grandmother, Doña Ana, whom everyone naturally called “Mami Two,” was an equally diminutive old white lady with red hair that made her look like a much aged Lucille Ball.

Now, here’s where things started to get confusing for me.

When I was younger, I thought Papi Two was an indigenous Puerto Rican, because I didn’t know Puerto Rican could be black, too. I also thought – and have no choice but to believe to this day – that Mami Two was Sicilian, because that’s what someone told me once upon a time.

It was not until I learned that people like Pedro Albizu Campos and Roberto Clemente were something called “Afro-Latinos,” and that very few indigenous Puerto Ricans have survived to the present day, that I began to suspect Papi Two wasn’t indigenous at all. Having inherited my grandfather’s coffee-bean complexion, I should’ve been tipped off sooner when the lighter-skinned members of my mother’s family began loving referring to me as “El Negrito” (which reminds me of something Orwell wrote: “To see what is in front of one’s nose needs a constant struggle”).

Meanwhile, I was entirely oblivious to my mother’s family’s race and nationality. My maternal grandmother, Doña Blanca, owned a house just a few block from the park, and since my mom and younger aunt seemed to speak fluent boricua, I figured they were just light-skinned Puerto Ricans. The one anomaly was my grandma – whom I referred to as “Baca” when I was too young to pronounce her name. “Ita,” as I later called her, spoke a clear and enunciated Spanish, and my mom and her two sisters addressed each other as “vos” – though I first thought they were saying “boss” with an accent.

As you can tell, there were a lot of things I didn’t know growing up. No one bothers to tell a Latino kid anything. Los niños are treated like latecomers to a party that’s already in full swing.

It was only sometime after my mom gave up on trying to fix my dad and our family fled to the Northwest Suburbs that I learned my mom had been born in a faraway land called “Santa Lucía.” Whenever my mother’s family would get together – which was often, after the exodus – they would recount stories from the village they’d left behind more than a decade before I was even born. It was during these gatherings that I learned Santa Lucía was in a country called “Honduras,” which was in a place called “Central America,” which was south of Mexico but north of South America.

Ita’s maiden name was Lopez-Brooks. Her father was a civil servant in the capital city of mixed Spanish and indigenous ancestry. Her mother was the daughter of a well-to-do English capitalist by way of New York City — George W. Brooks was an engineer who came to Honduras before the turn of the century during the silver rush.

Much to my dismay, not much is known about my maternal grandfather, however. The two things I have of him are his name – Nikolai Silacci – and where he was from – the former Yugoslavia. I once worked as server in a restaurant that hired a lot of South Slavs, and when I asked them about the name I’d been given, they told me it was probably Croatian.

Anyway, back to the story.

As it turned out, my family had moved to a suburb with a strong Mexican enclave. I’m not sure I’d met a Mexican person before we moved there in the third grade, but my contact with Mexicans brought me to the realization that, not only were Honduras not like Puerto Ricans, they weren’t like Mexicans either. Mexicans spoke a Spanish I had trouble understanding – nothing like my grandma’s easy Spanish – and they ate strange foods, like mole and chilaquiles.

I remember being reprimanded by Ita for using my tortillas to make tacos from the meal she’d prepared. “We don’t do that,” she instructed. “We roll them in one hand and eat with the other.” (Ita later went on to become president of the Honduran Society of Chicago.)

And so, just as my mom had done in Humboldt Park decades earlier, I became a cultural mutt. But while my mom was a Honduran parading around as a Puerto Rican, I became a Honduran-Puerto Rican in Mexican clothing – quite literally. (I was, at one time, a full-blown cholo.)

Life carried on that way through high school, living like a chameleon, never fully belonging. A chameleon, after all, may be able to blend in with the leaves, but that doesn’t make it a leaf.

My true identity began to emerge during my late teens and early twenties. It was then that I discovered the power of ideas and recognized my ability to comprehend them. I’d always been a closeted nerd, embarrassed of my inner brainiac as something could spell social death for me if it were ever revealed.

But it was while reading the great thinkers of the past that I found a community where I felt I truly belonged – a community of thought. Here were a group of people connecting to me through the centuries that divided us. I bonded with them immediately, more than I had with my own friends and the people in my family. I understood them. We shared the same worries and the same hopes. I wanted to live in the world Rousseau and Paine had championed. I was as depressingly sanguine and driven to know as Adams and Lincoln. I was vexed by and compelled to explain the same things that vexed and compelled Clemens, Mencken and Baldwin.My mixed background made it easy for me to reject all racial, ethnic or nationalistic loyalties. If I’m going to claim pride for being black, white and indigenous, I might as well claim pride for being a human being — and who isn’t proud to be human? (PETA, maybe.) Likewise, if I’m going to claim pride for being an American, a Honduran, a Puerto Rican, a Brit, a Spaniard, a Croatian and an Italian, I might as well declare myself a citizen of the world.

And that’s how I’ve come to define myself, as a human being with a passion for people and their good ideas, no matter where they may exist.

The late Christopher Hitchens wrote, “The essence of the independent mind lies not in what it thinks, but in how it thinks.” I, as a Latino of a multifarious background, have given up trying to pinpoint whether I’m mostly Honduran, mostly Puerto Rican or mostly whatever, because clearly I’m not mostly either of those things. If I discovered today that I was mostly Honduran, only to discover tomorrow that I was in fact mostly Puerto Rican, I doubt the news would alter me one bit. And the same goes for my Latino-ness and European-ness.

I couldn’t care less what flag a person waves or what food they eat at home. I care most about how a person thinks and lives.

While my origins have shaped my perception by compelling me not to place so much emphasis on another person’s origins, I’m not defined by my family’s past. Where you’re born in this world merely affects how you view the world, but the view should not distract you from the fact that we’re all human. No matter what racial lens you may see the world through, the human lens must be your primary one.

Thus, as I’ve learned and continually learning, we are less where we come from and more where we are going. We are not what we were, but what we are becoming.

I was given the name “Hector Luis Alamo, Jr.” at birth, in a place called “Chicago,” in a land called “America,” of parents called “Honduran” and “Puerto Rican.” Yet none of these labels fully capture who I am. In fact, they don’t even approach my true essence.

I am what I do each day, and what I dream in the meantime.