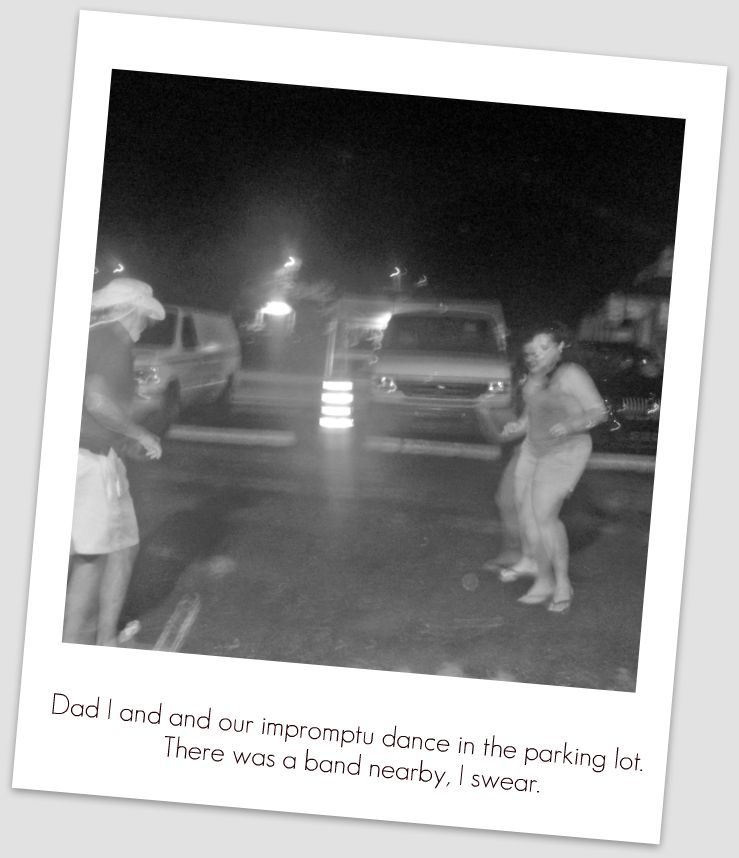 31 years late: A life without my Dad

My Dad doesn’t say much on a day to day basis. Days go by and all of his spoken words combined equal a paragraph…maybe. He doesn’t say much, but he sings. BOY does he sing. He has a love for old, romantic ballads and belts them out with such passion that you barely notice that he can never quite hit that high note he aims for. It never ceases to amaze me how he knows all of the lyrics to those old songs, and secretly it thrills me to know where I got my love, and dare I say talent, for singing.

It also amazes me how his memories of long ago seem to be clear as day. Not only does he remember those aforementioned lyrics, but he talks about the span of his

childhood to early adulthood as if it happened yesterday. As my own childhood memories are foggy, I’m a little jealous. As great as it is that he has such great memories of that time in his life, and can relive those days−as well as entertain himself with the music of his youth−sadly, that is where he is stuck. Stuck because he is in the early stages of Alzheimer’s.

Alzheimer’s is a funny disease. Not funny ha ha *obviously* but funny in that other way. The mean girl kind of funny, the kind you just want to knock down with one blow to the face, kick in the stomach, then spit on it to show it how you really feel because all it does is play stupid tricks on you.

Oh yes, Alzheimer’s is a funny disease that often robs its victims of their today leaving them with only yesterday. This is true not just for the patient, but for those who love them.

My story might be a little different than the one of those who knew their loved ones at the peak of their lives. My parents divorced when I was seven, and between then and a few months ago, I’d only had three significant interactions with my Dad: as a child, as a teenager, and a family crisis some years ago. Basically, he was a stranger to me. Having missed 31+ years of his life, in many ways he is still a stranger to me. In turn, I am also a stranger to him, and sadly that will always be our relationship.

I won’t have the chance to get to know the man my Dad was for those 31 years, and though he may see that I’m an adult, he’ll never really know the person I became. Even on his most lucid days our conversations remain focused on the past, and I often wonder if, for him it’s not just a symptom of his disease but also a coping mechanism. Erasing 31 years and denying today may be a way for him to not feel the guilt of his lack of presence in my life.

In many ways I understand and I try not to feel overwhelmed by the sadness, but oh how I wish I could have known him, and selfishly, even more so, how I wish he could know me and the woman I grew up to be. I think he’d be pretty proud and he’d see that in many ways, I’m just like him.