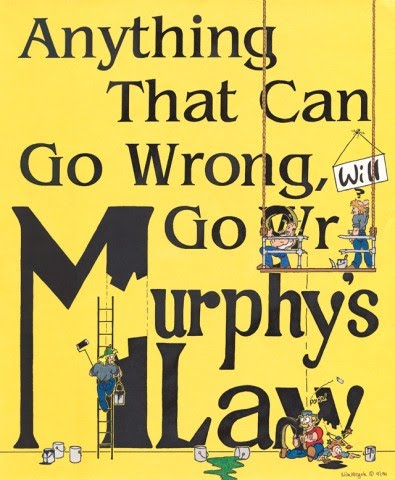 Murphy and his damn law

As I walked towards my car this morning my face dropped and my mouth opened in complete disbelief. The little delinquents who have been vandalizing the empty townhomes and cars in my neighborhood had tagged my car. There it was, graffiti that I can only assume is gang related, on my passenger side window. My anger soon turned into tears as I got closer only to see that they had also keyed my car. At first I thought they had just scratched the paint, but when I got to the car and felt it, I saw that they scratched so hard they left a dent that runs from the middle of the back passenger door to the middle of the front passenger door.

I realize that in the grand scheme of life, that is really a minor inconvenience. People deal with much worse things than that. Some of you may be

thinking, it’s not that serious but if it was you, you would feel different. You might feel as I do; violated. I have to go home tonight and park if not at the scene of the crime, at least in the vicinity of it. What is to stop the fucker(s) (please excuse my language) from doing it again, or from taking it one step further and doing more severe damage.

My car just turned a year old, six days ago. I’ve been pretty good to it. I am a bit of a girly girl so maybe I’ve neglected some regular maintenance, but no accidents. Yet now I not only have the dents I found above the passenger rear tire, but a scratch too. The insurance deductable will probably be more than the cost to fix it, but either way I can’t afford any of it right now since Uncle Sam screwed me with my refund this year.

I truly believe in karma and I’ve spent all day wondering what the hell I did to piss off the universe. My rib hasn’t healed from my snowboarding fall, I almost had a flat tire yesterday and it took driving to four gas stations before I found one that had an air machine that wasn’t out of order.

Seriously, I know it’s only Tuesday but I’m about to give up and call it a week.

Murphy’s Law has kicked my ass and I’m feeling a little battered and bruised.

2 thoughts on “Murphy and his damn law”